As published in Tank Storage Magazine

One of the largest integrated midstream companies in the US implemented the latest technological innovation in stormwater discharge to improve how it operates its network of pipelines and more than 100 liquid petroleum storage terminals.

The company’s core values include a commitment to environmental stewardship and regulatory compliance. To align operations with these values, a regional manager decided to develop a new operational program with the following objectives:

The manager said: “Over the past 20 years, our industry has experienced significant technological improvements in how we operate our pipelines and terminals. However, I was frustrated with the lack of innovation in one seemingly simple daily task – manually draining stormwater from secondary containment pads.”

After more than one inch of rainwater accumulates in a containment (which occurs every nine to 10 days in his territory), the containment pads need to be drained out. The main reason is that one inch of rainwater will take up between 10% and 20% of the sump capacity of the pad. If the stormwater is not removed from the sump, there would not be enough capacity in case of a significant spill inside.

Each of these containment pads has manual valves to release excess stormwater. The discharge pipes range in size from three-quarters of an inch to four inches. However, the process for manual draining is the same for every containment:

The manager explains: “We must perform daily inspections, whether it has rained or not. As a result, our team is used to walking through the entire terminal, but the process can be 200% to 500% longer after a rain. Even though it is just a cost of doing business, I always believed there had to be a better way. However, the problem is further compounded if we discover an oily sheen on the containment stormwater. It does not take much petroleum to make a sheen – just a few drips from a valve, fitting or hose.” It is illegal to release stormwater with an oily sheen.

As a result, the process is more challenging as the operator cannot discharge the contaminated water. Therefore, the following steps must be taken:

This process can take up to three hours of a technician’s time. To counteract this labor-intense manual draining, a few companies have developed petroleum filter valves.

Petroleum filter valves are filled with a polymer that has two important properties:

In theory, it is a great idea. But, in practice, these petroleum filter valves have four main drawbacks: The manager says that two different versions of petroleum filter valves were initially used. “They worked fine for the first week or two, but by the end of the first month, their flow rates dropped to a trickle, and our containment pads filled up with stormwater. Changing out the petroleum valves at $1,000 each was cost-prohibitive. We decided to go back to the old manual way of draining. However, when we heard that HalenHardy was working on a new petroleum valve and pre-filter system design, I was interested.“

Talking about the company’s solution, Donny Beaver, partner at HalenHardy, says: “Our development team was originally challenged by a large electric utility to see if we could help them prevent their $2,500 petroleum filter valves from clogging. We got hold of about a half dozen plugged valves and discovered that more than 90% of their clogging was due to sediment, not oily sheen. So, we focused on solving the sediment problem first.”

However, the sediment proved to be more problematic to control and capture than the company initially thought. “We live in the mountains of Pennsylvania, and we have dramatic seasonal changes from the torrential April rains, the pollen in May and June, the scorching July sun, the falling leaves in November to the deep freeze of winter. Concrete cracks and chips. Leaves decay. Algae grow in containment shaded by pipes and tanks. It seems like a never-ending barrage of detritus in a stormwater soup.”

Fortunately, the terminal operator had a containment pad located a short distance from the development team’s lab.  They were able to gain daily access to the pad and experiment in real-world conditions. Pat Healey, R&D team specialist, adds: “We try to simulate mother nature in the lab, but we prefer to develop our products on actual job sites. As fate would have it, we picked the rainiest year on record for field testing. It was both horrible and great at the same time. We learned so much in record time.”

It became evident early on in the process that a single-stage filter (like those in other petroleum valves) was not the answer. After testing more than 80 different products in hundreds of different combinations, the research team settled on a four-stage pre-filter system.

Healy says: “We discovered these four stages of pre-filtration extended the life of petroleum filter valves by 200% to 300%.” While performing the tests, the research team also discovered a solution to reduce the size of petroleum filter valves by 400% and increase the filtration rate fivefold. “Containment pads offer very low head pressure as rainwater pours in. The old filter valves were designed for higher head pressure,” Beaver says. “We did some innovative tweaking of the polymer media sizes, shapes, and layering to allow us to get outstanding flow rates at just one inch of head pressure. And we still maintain a failsafe valve shutoff in case of spills. It is a win-win.”

The manager concludes: “Halen Hardy tested on our site in the worst conditions for eight months before they offered final recommendations. They gave us two options:”

“We opted for the service agreement, and after six months, it’s working like a charm. We even had an accidental overnight spill of about 50 gallons of diesel at one of our pig launching pads and the Drainiac filter valve shut off, just like it was supposed to. Not one single drop of diesel escaped the pad. I couldn’t be happier.” 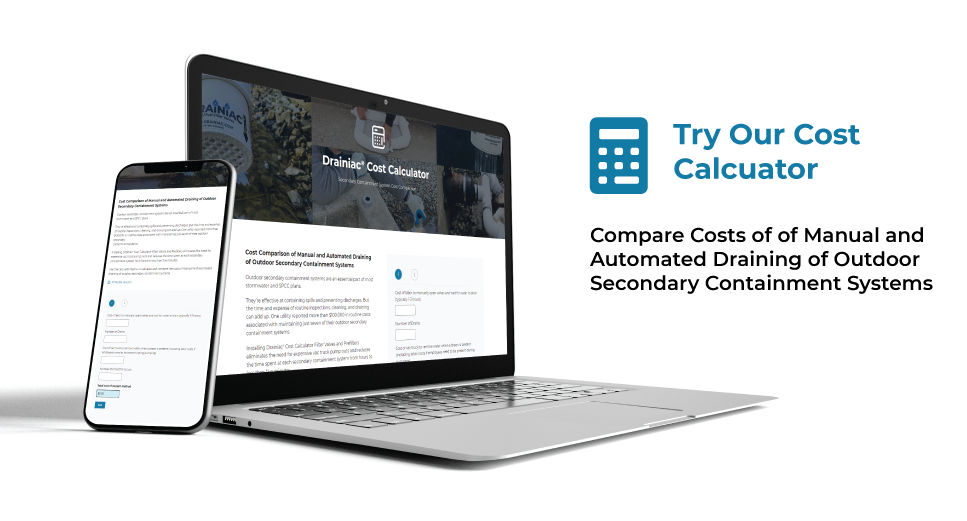